We can’t always trust what we see. We are used to how things are supposed to look. If pieces are missing, sometimes our brain fills them in. Our brain puts information together in a way that makes sense and allows us to see optical illusions in different ways. Optical illusions have been studied for thousands of years. The ancient Greeks even used the principles of optical illusion in their architecture.

Is it a Candlestick or Two Profiles

This image can be seen one of two ways, as a candlestick or a pair of identical profiles. It is very difficult for our minds to view the image both ways at the same time. Most people will either see the candlestick or the profiles, but not both.

Which do you see? Why?

Which Center is Larger?

Can you tell which center circle is larger of the two? The center circles in both graphics are the identical size. The one on the left side looks larger because of the smaller circles around it.

Do You See a Triangle?

The triangle is an optical illusion that you see because of the angles of the three dark shapes.

Is the Ferris Wheel Moving? 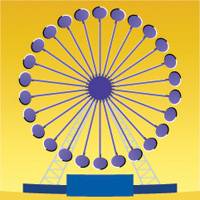 When you look at this Ferris wheel, does it look like it is moving?

And which direction is it going?

Which is larger – the white squares or the black squares?

Actually, all of the squares are the exact same size!

And the little white dots make the illusion of a ball in the middle – can you see it?

Does one of these men look taller than the others? It is a trick – they are actually all the exact same size! Our eyes just perceive that one is taller based on where they are standing in relation to each other.

Special thanks to the eye Didn’t Know That! for material that aided in the creation of this website.

Always a great experience. Never have to wait for appointment and feel like I get a very comprehensive exam. Staff is also friendly and very responsive.
6 days ago
- Ilene O.